Havana is the capital of Cuba. Spanish colonial architecture in the center of Old Havana from the 16th century includes the Castillo de la Fuerza Real, a fort and a maritime museum. The National Capitol building is an iconic monument from the 1920s. Old Havana is also home to the Baroque Cathedral of San Cristóbal and Plaza Vieja, whose buildings reflect the city’s dynamic architectural mix. 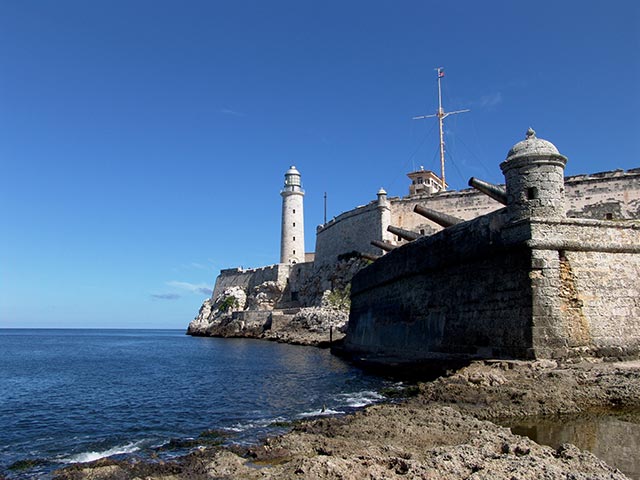 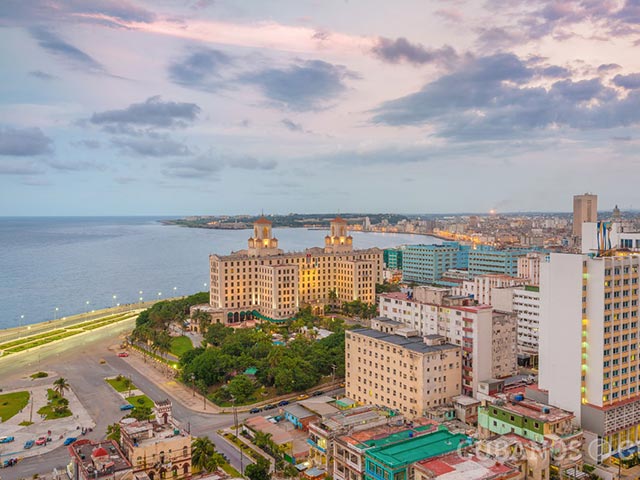 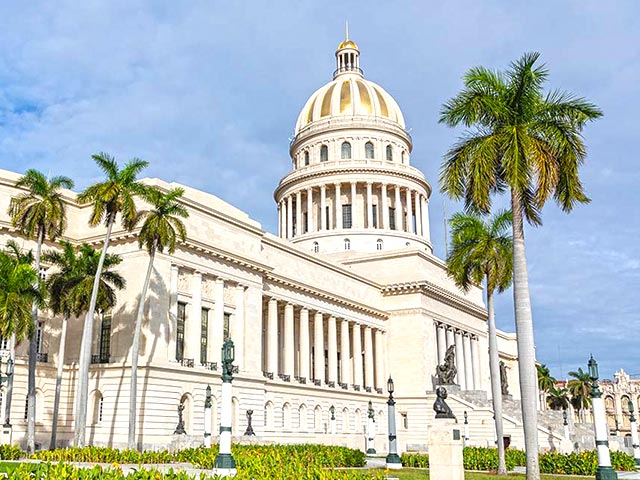 Founded in 1514 (initially on the south coast of the island) by the conqueror Pánfilo de Narváez (under the orders of Diego Velázquez de Cuéllar), under the founding name of Villa de San Cristóbal de La Habana, it was one of the first eight villas founded by the Spanish Crown on the island.
Due to its privileged location, facing the North Atlantic coast, and the characteristics of its bay, the then town became an important commercial center, which is why it was subjected to attacks and looting by pirates and corsairs during the early sixteenth century.
In 1561, the Crown ordered the town to be the concentration place for Spanish ships from the American colonies before crossing the ocean together (Fleet of the Indies), thus building, for its protection, military defenses at the entrance to the bay of Havana and in strategic places, making the city one of the best defended in the New World.

Its historical, architectural and above all cultural heritage, expressed in the fusion between Europeans, Africans and aborigines at the beginning, together with other more contemporary ethnic and cultural components, make the city an important recipient of international tourism and the center of national life.
Its historic center, declared a World Heritage Site by Unesco in 1982, is today one of the best-preserved architectural ensembles in Latin America.
Among its most representative monuments we find the Havana Cathedral, the Plaza de Armas, the Castillo del Morro, the Museum of the Revolution, the National Palace of Fine Arts, the Great Theater of Havana, the Capitol, the Plaza de la Revolución and the Malecón, perhaps the most internationally recognized symbol of the city.

Currently there are many luxury hotels in Havana, both in the historic area and in the municipalities of Playa and Miramar. Havana has traditions, museums and institutions that are true bastions for humanity, which make it a priority destination in Latin America and the Caribbean.
Currently the city receives more than 1 million tourists a year.
There are also private tenants who offer their houses to foreign visitors who visit the island, which constitutes a very important form of sustainable tourism for the island, since it allows bring tourists closer to Cuban culture while collaborating with the development of the local economy.

The main tourist attraction in Havana is its historic center. A true masterpiece full of monuments and buildings with art deco, neoclassical and colonial baroque styles.

What to see in Havana?

To get to know Havana minimally you need to have at least three days; Although it is advisable to visit it for at least a week. The areas where most of the places of interest are concentrated are: Old Havana, Centro Habana and Vedado. The different neighborhoods into which Havana is divided have unique and unrepeatable qualities that make them wonderful places, and above all, in locations that you cannot miss on your trip to Havana, Cuba. Old Havana, located in the east of the city, facing the bay, is the suggestive masterpiece of the city, it is located where the town was initially founded. Centro Habana, is a neighborhood located in the northern and central part of the city that offers a revealing look at Cuba and houses a large number of emblematic places; while Vedado, in Plaza de la Revolución, is the most splendid area.

What to do in Havana?

Havana will earn a place in your heart, with its countless facets and possibilities it has to offer you. Stroll through its cheerful and colorful streets, from Old Havana to Vedado, lose yourself among the centuries of colonial and contemporary history that it offers, meet the old countrymen who brighten up every corner of the town with their stories, stories and Cuban points. Let yourself be captivated by the music and the son, attending one of the magnificent dance classes that offer the best Caribbean rhythms, or simply enjoy the Caribbean music live while sipping a tasty mojito. You can enjoy them in two impressive experiences: The Tropicana Cabaret, taking advantage of a fantastic excursion with a show included, which in different locations offers magnificent shows and dinners; and the Cabaret Parisien with more than fifty years of history, offers shows full of light and color with a multicultural background.

When to visit Havana?

Between the months of June and October, Havana, as in all of Cuba, can become suffocating, therefore, the best option is to visit the city during the cooler months. Between the months of November and April are the best dates to travel to Havana. In addition to being cooler, it will also be the dry season, thus avoiding the hurricane season. On the other hand, February is one of the best times to visit Havana, since it is when the International Jazz Festival and the Havana Triathlon are held, while in October the International Ballet Festival is celebrated. During the month of November, the Havana Marathon takes place. Finally, the busiest and most lively month is December, since it is when the Festival of New Latin American Cinema takes place and with the beginning of the year, on January 1 and 2, the Triumph of the Cuban Revolution and the Day Victory.

How to get to Havana?

To get to Havana from another country, the best option is to take a flight to the José Martí International Airport, which is only twenty kilometers from the city center. Once here, it is advisable to take a taxi to take you to your accommodation. It is also possible to arrive at the Port of Havana at the Sierra Maestra Cruise Terminal, if you travel on a Caribbean cruise, they normally make 48-hour stopovers, which will leave you enough time to visit the most interesting points of the city. Finally, if you are already in Cuba, and you want to visit the city, there are several options, from domestic flights to buses, to scheduled roundtrip excursions.

What are the best luxury hotels in Havana?

What are the best cheap hotels in Havana?

What are the best hotels on the beach in Havana?

Popular hotels by the beach in Havana include Blau Arenal Habana Beach, Cubanacan Tarara, and Be Live Havana City Copacabana.

Do any 5-star hotels in Havana have a pool? 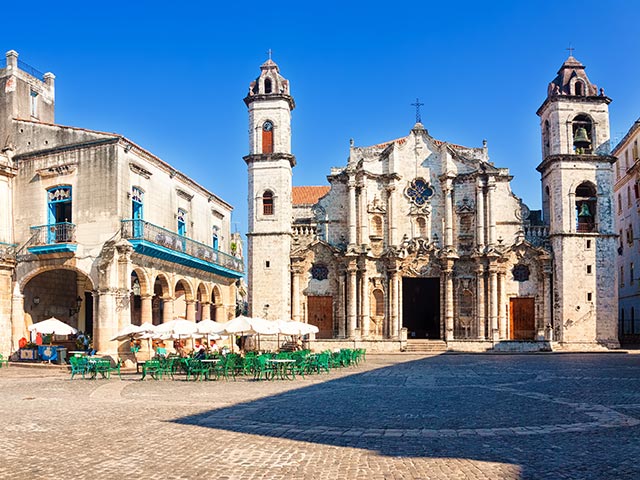 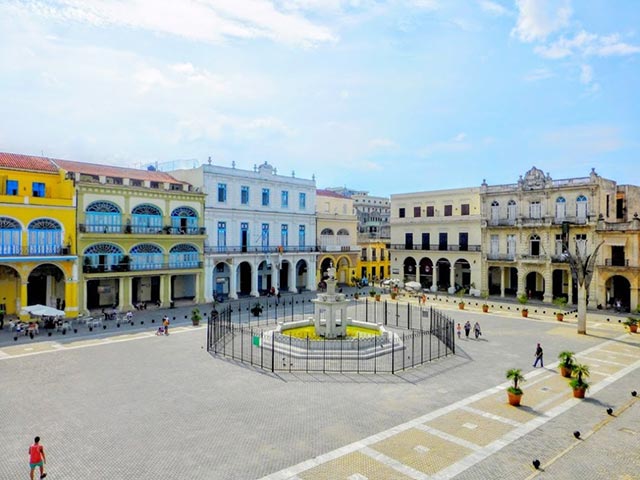