Cayo Coco and Cayo Guillermo are islands in the Jardines del Rey chain, in the central region of Cuba. They are known for their white sand beaches and coral reefs; and its north coast has all-inclusive resorts.

Natural attractions include lagoons and swamps that are home to birds such as the white ibis and a native colony of pink flamingos classified as one of the largest in America. 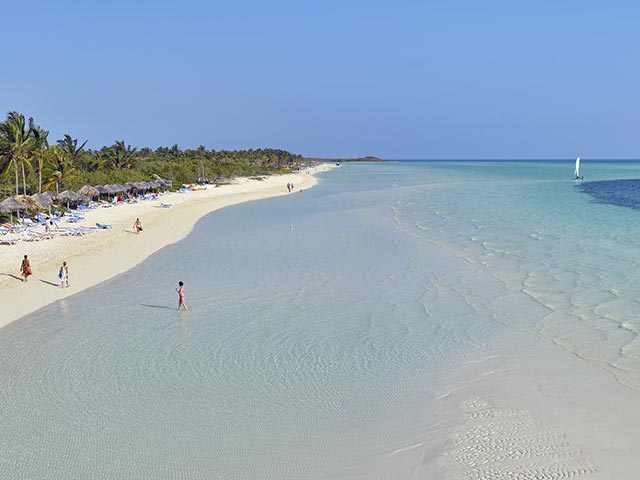 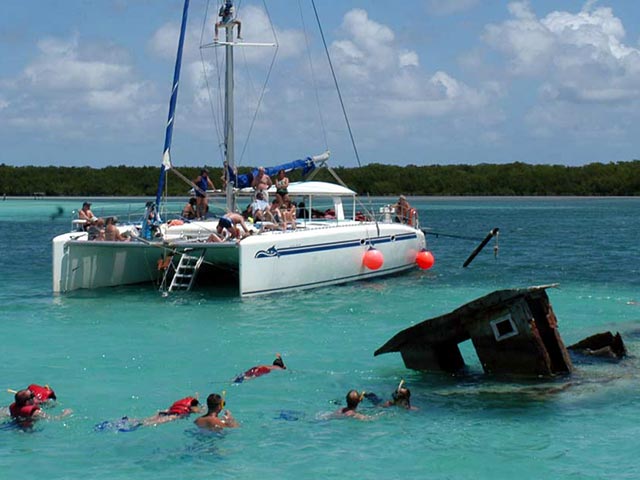 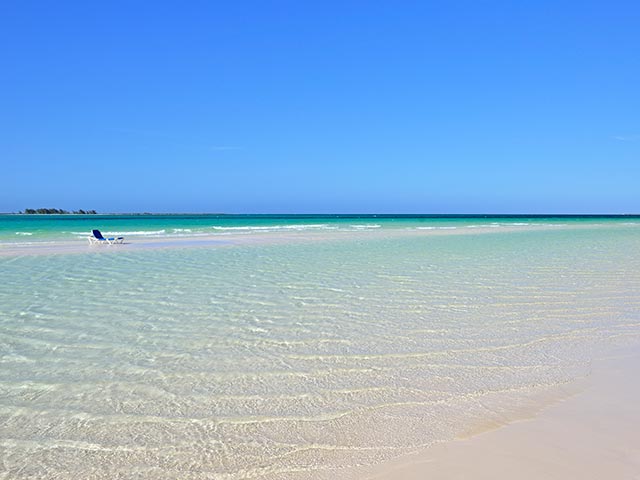 Cayo Coco is an island in the central region of Cuba, its surface area of ​​370 km² makes it the fourth largest island in this country; It is famous for its luxurious all-inclusive resorts. It is located in the province of Ciego de Ávila and more specifically in the Morón municipality.
It is part of a chain of islands known as “Jardines del Rey”, made up of Cayo Guillermo, Cayo Coco, Cayo Cruz and Cayo Romano, in the archipelago known as Sabana-Camagüey. The key is connected to the island of Cuba by means of an artificial road, called pedraplén, about 17 km long. The construction caused protests by environmentalists as it disrupted the flow of waves and thus the marine life cycle.
Despite initial fears, wild flamingos still live in the shallow waters and can be seen frequently from the man-made path, although not as often as before construction.
The island of Cayo Coco is linked by a natural path to Cayo Guillermo. The island has its own international airport, Jardines del Rey International Airport. Since 2005, tourists can fly directly to the airport in Cayo Coco, instead of having to do it through the main island of Cuba, assuming great savings in transfer time.

Currently Cayo Coco is one of the main tourist centers along with Varadero, Cayo Santa María and Cayo Largo. The islet has an excellent all-inclusive hotel network. The key is famous for its beaches, some of which are considered among the most beautiful in Cuba, 2 highlighting Playa Larga, Playa Flamencos and Las Coloradas, although the most famous is Playa Pilar, in the neighboring Cayo Guillermo key.

Cayo Guillermo is a popular tourist destination and has 4 all-inclusive resorts in addition to having one of the best beaches in the country, Playa Pilar. In the north of the Cuban province of Ciego de Ávila located in the center of the country, one of the destinations with the most dynamic growth in the country’s tourism sector is located, which responds to the colonial name of Jardines del Rey. The infrastructure of the leisure industry in that region shows a dynamic growth, with the ultimate goal of reaching more than 20 thousand rooms, to which are added a modern air terminal, ports, nautical bases, natural parks and of course, programs of ecotourism.
Cayo Guillermo is linked to the mainland by a road over the sea from Turiguanó, in the north of the province of Ciego de Ávila, famous for its lagoons where trout fishing is a special attraction along with its excellent rural landscapes.
This islet has excellent hotel facilities, has artificial lakes, swimming pools and all possible entertainment, animation and service offers in the midst of an environment hardly altered by human presence, one of the most spectacular destinations to satisfy any taste or preference.

What are the best beaches in Cayo Coco?

The main attraction of this islet are its beautiful beaches with fine sand and crystal clear waters, of which the most spectacular are Playa las Coloradas, Playa Larga and Playa Flamencos. Playa Larga is the best known beach on this key and is ideal to enjoy a relaxing bath or rest. It has a length of 2.5 kilometers and enjoys spectacular views. Playa Flamencos is also a very beautiful and charming beach. In it it is possible to walk around 200 meters out to sea and stand, which is why it is sometimes filled with the beautiful pink flamingos that give it its name. Playa Las Coloradas is a paradisiacal beach with calm turquoise waters.

What activities can I do in Cayo Coco?

Its seabed is the greatest attraction that you can discover on your way through this incredible key. Diving or snorkelling is an unforgettable experience thanks to its exotic coral reef and its amazing variety of colorful fish. In addition, the key has a diving center, where they will help you with the material and a guide. With several dive sites, Cayo Coco is one of the most recognized places in the world for diving. Underwater caves, spectacular fauna, coral reefs and much more in the depths of this wonderful corner of the tropical Atlantic. Cayo Coco stands out as a perfect destination for nature tourism and relaxation tourism; but it also offers numerous facilities for all kinds of sports. In addition, here you can carry out endless activities, among which the catamaran rides stand out, which are a beautiful experience for those who are looking for an adventure practicing snorkelling in their barriers.

How can I get to Cayo Coco?

To access the key from Havana you can take a transfer by road, with an approximate duration of 7 hours, or take a flight from the José Martí International Airport to the Jardines del Rey International Airport, which is the main airport in the area. which also receives some direct flights from abroad. It may seem complex, but without a doubt all this is really worth it, because its keys are one of the most powerful attractions in all of Cuba, so it is not surprising that some of its beaches are considered among the most beautiful in the world. To make the trip a more enjoyable journey, spending the night in the city of Trinidad is also an option to value. It is a very good option due to the attractiveness of the city. Its historic center was recognized as a World Heritage Site by UNESCO and is worth visiting.

What are the best hotels in Cayo Coco?

What are the best beaches in Cayo Guillermo?

Despite being smaller than the rest of the islets in the area, in its scarce 13 km2, Cayo Guillermo has an abundant fauna, with an incredible landscape of dunes that reach 15 meters in height and with some of the best beaches of the Cuban archipelago that will not leave you indifferent. Thus, in the magnificent Playa Pilar, with its wide strip of white sands and its turquoise and crystalline waters, you can both relax in the middle of an idyllic setting and enjoy the options it offers you. It is a natural paradise like no other. Rich in biodiversity such as starfish or iguanas and known especially for its impressive white sand. Another interesting option is El Paso Beach, very suitable for its large number of services for activities such as diving. If what you are looking for is a total disconnection and relax in the sun, your beach is Playa del Medio. The most isolated of the three and the least crowded.

What activities can I do in Cayo Guillermo?

If you are passionate about diving, here you will have the opportunity to contemplate its impressive seabed full of coral reefs and colorful fish, a very diverse marine fauna. In addition, you will find several options both in the hotel resorts and in the specialized diving center. This key is also one of the best places in all of Cuba to practice deep sea fishing. Some of the most sought after fishing activities offer catches of barracudas and mackerel. Its marina has a large marina and is considered one of the main international ports of entry in the entire country. In Cayo Guillermo you can do several excursions with boats. This is the case of the Safari to Cayo Media Luna in Catamaran, which includes lunch and a great plan for the whole day suitable for the whole family.

How do you get to Cayo Guillermo?

Which hotels in Cayo Guillermo are good for families?

What are the best 5-star hotels near Playa Pilar? 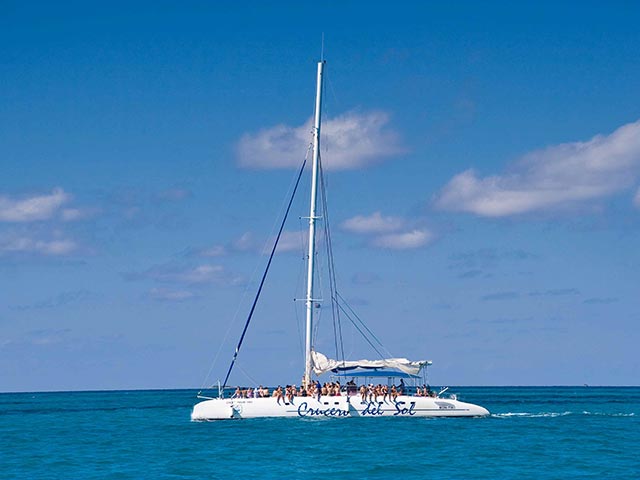 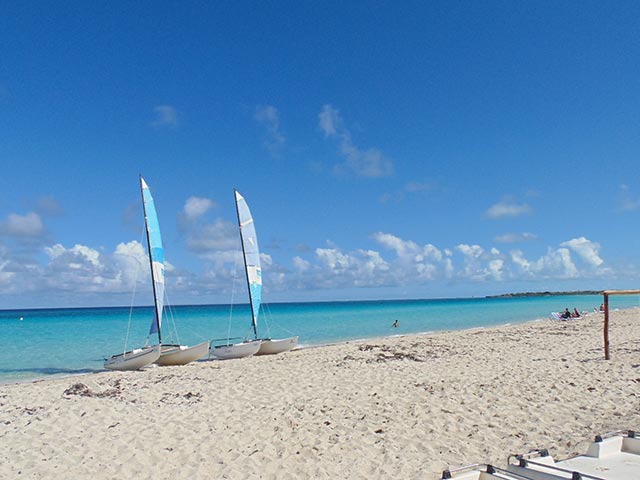